North Little Rock has jump-started the use of alternative fuels here.

As part of a larger commitment to alternative fuels, the City of North Little Rock, Arkansas, added 16 compressed natural gas (CNG) vehicles to its fleet, including nine Chevrolet Tahoe police vehicles. The city converted the patrol vehicles to CNG with help from the Gaseous Fuels Vehicle Rebate Program, run by the Arkansas Clean Cities (ACC) coalition, housed in the Arkansas Energy Office.

The vehicle conversions each cost about $12,000, and North Little Rock received $77,048 in State Energy Program Recovery Act funds to help foot the bill. "We would not have been able to afford conversion costs without the rebates," said Nathan Hamilton, the city's director of special projects. The police have been pleased so far with the Tahoes' responsiveness, and the city is happy because CNG has the potential to save about $2 per gasoline gallon equivalent (GGE) in fuel costs. However, with petroleum prices so low in 2016, savings are approximately $0.30 per GGE.

"North Little Rock has been a community leader for alternative fuels in general," previous ACC Coordinator Kelly Volin said. And by switching about 5% of its police fleet to CNG, the city has taken another important step in reducing petroleum use.

In August 2011, the municipality opened a CNG fueling station, the first publicly accessible CNG station in the state. As of 2016, the city sells the fuel for $1.55 per GGE. Statewide, there are 12 public and four private CNG stations. "North Little Rock has jump-started the use of alternative fuels in Arkansas," Volin said. 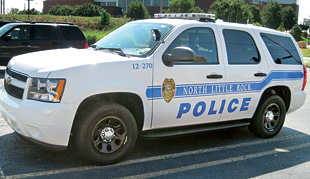