This is a text version of the video segment Cities Clean up With Biofuels, which aired on Nov. 21, 2013.

JOHN DAVIS: Biodiesel and ethanol are cleaner-burning replacements for diesel and gasoline fuel that are domestically produced and renewable, making them attractive cornerstones for building clean fleets. And no city demonstrates that more than Hoover, Alabama, where renewable biofuels reign supreme. Three-hundred-thousand gallons of E85 are consumed each year by their flex-fuel police vehicles. Hoover leads the state with 88% of their municipal vehicles using some type of advanced fuel, including biodiesel. Commercial B20 is used by their public works fleet. But the city also makes their own biodiesel. Since 2007, a recycling program allows residents to drop off their waste vegetable oil for processing. Biodiesel fuels 40 municipal vehicles, including these city trolleys.

TONY PETELOS: We're collecting about 1,000 gallons a month from 21 small restaurants that don't have a means to dispose of the cooking oil, and also our residents in the city of Hoover. We convert that into biodiesel.

JOHN DAVIS: Clearly, the city of Hoover is making it happen when it comes to biofuels.

In Arizona, the firefighters of the Rio Rico Fire District have hit upon an innovative renewable biofuel solution. The problem was what to do with leftover grease that migrates from a nearby river into the wastewater treatment plant. The solution was a biodiesel processing unit that turns the grease into fuel for their fleet of fire trucks, ambulances, and water tender trucks. The Tucson Regional Clean Cities coalition coordinated the efforts of local, state, and federal agencies to make this first-of-its-kind project possible. The pure biodiesel is blended to B20 and stored in a 500-gallon tank. With almost 90% of their fleet using biodiesel, the Rio Rico Fire District is saving thousands of dollars a year.

MARK GERBERT: I think we figured out somewhere costing right now between $8,000 and $10,000 a year, which is a substantial step for us.

JOHN DAVIS: As Rio Rico is only a few miles from Mexico, a similar biodiesel unit has been set up by firefighters there in a bi-national effort to turn waste into renewable green fuel for both sides of the border.

Lambert Field in Saint Louis was an early adopter of biodiesel for its flight line support vehicles. Lambert began experimenting with biodiesel in 1987. Today, they have close to 400 vehicles that run on B20, including light-duty trucks, runway sweepers, tow trucks, and front loaders. Their aircraft rescue firefighting units and emergency generator also run on the cleaner-burning fuel.

MICHAEL BERNICH: We are trying to educate the public through the airport and through Saint Louis Clean Cities by the use of biofuels and trying to do some promotional stuff about us being able to help clean up the atmosphere in the area.

JOHN DAVIS: Saint Louis is one airport where reducing the use of petroleum fuels has been a top-flight priority for over 20 years.

Another fast-moving fleet, the New Orleans Regional Transit Authority, turned adversity into a green advantage. When Hurricane Katrina destroyed much of the agency's old diesel bus fleet, it replaced them with 152 buses that run on biodiesel year-round, plus five new hybrid bendy buses, with more on the way.

JUSTIN AUGUSTINE: If we're going to be a significant player in the community in which we serve, we have to protect our community, and we feel by switching to biodiesel helps us with our and our just clean-air transmission back to the community.

JOHN DAVIS: With their current fleet logging close to 6 million miles a year, RTA's goal is to provide all of the Crescent City cleaner, smarter transit.

More and more private fleets are moving to the use of alternative fuels. And the Essential Baking Company in Seattle has made biodiesel a winning recipe. The organic bakery began using almost pure B99 biodiesel in delivery trucks in 2005. Currently, their 18 biodiesel trucks serve 21 routes seven days a week throughout the state. Drivers used to refuel off-site. Now a local biodiesel co-op provides solar-powered mobile fueling right in their parking lot. Even though biodiesel can cost more than petroleum diesel, the company feels the sustainable fuel is a smart investment.

STEVE KAVANAUGH: What we really like about biofuel is we don't do anything different to the trucks; we just put the fuel in it, and so there's no modifications to the vehicle.

JOHN DAVIS: Essential worked with Western Washington Clean Cities coalition members to identify the right alternative fuel for them, and is finding that B99 is the perfect recipe to make their bread empire rise in the Pacific Northwest. 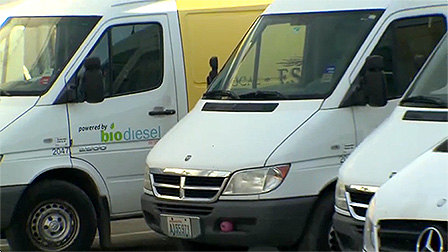