This is a text version of the video segment Hybrid and Electric Vehicles Boom Coast to Coast, which aired on Nov. 21, 2013.

JOHN DAVIS: Hybrid and electric vehicles are booming in popularity as a green transportation choice. Lee's Summit, Missouri, R-7 School District is where four Smith electric trucks are used to deliver dry goods and office supplies to more than two dozen schools and offices. The 26-foot box trucks have a 100-mile range, which is ideal for delivery routes. The truck's batteries are fully recharged in six to eight hours overnight. The trucks are so quiet that rearview cameras were added so drivers can watch out for kids and pedestrians. Early estimates are for $8,000 to $12,000 savings in diesel fuel per school year. The district has also placed signage on the trucks to boost alternative fuel awareness.

RON COX: It's cleaner, it's greener, it's safer, and it's the way we need to go. And so we're proud of that, and we want to advertise that for public information.

JOHN DAVIS: Partial funding for both the electric trucks and charging stations came from a federal grant in cooperation with the Kansas City Regional Clean Cities coalition. The Lee's Summit R-7 School District is doing their part to show support for the environment in the Show Me State.

A new public-access electric car fleet in Philadelphia, Pennsylvania, might have even persuaded our founding fathers to embrace energy independence. Philly Car Share, a subsidiary of rental car mainstay Enterprise Holdings, is rolling out a new fleet of 18 Chevrolet Volts for their members. By working together with the City of Philadelphia, the local Clean Cities coalition, and other key regional partners, the Philly Car Share EVs will be able to take advantage of charging stations that are already popping up across the City of Brotherly Love.

JAMES CALLAHAM: We think there are a lot of people in the city of Philadelphia that really care about the environment, that want to make sure that we have fuel-efficient vehicles that are utilized here in Philadelphia.

JOHN DAVIS: Philly Car Share is looking to expand their plug-in and hybrid vehicle fleet to at least 100, saving 65% in yearly fuel costs, making it a true electric car leader for the Keystone State.

In Bakersfield, California, an electric bus is giving a green boost to downtown businesses. Pacific Gas and Electric donated the refurbished bus, customized to look like a historic Bakersfield electric trolley. The free-ride 22-passenger trolley makes six stops along its one-mile loop. Powered by 40 deep-cycle lead-acid batteries, it has a range of 60 miles. Saving 1,250 gallons of petroleum fuel every 10,000 miles, this novel clean vehicle is a joint effort between local government and private enterprise, as well as a reminder of the past.

LINDA URATA: It's been renovated so it looks like an old downtown trolley. We used to have electric trolleys that ran here, you know, 100 years ago, turn of the century. So it's kind of like everything old is new again.

JOHN DAVIS: No wonder Bakersfield residents are so charged up by this true hometown solution to saving fuel and reducing pollution.

In Baltimore, Maryland, the brightly colored Charm City Circulator is creating quite a green buzz around town. Baltimore is the first to use the EcoSaver IV hybrid electric bus by DesignLine as part of a major free shuttle fleet. Thirty percent of the time the 44-passenger buses run emissions-free on electric power alone, then a small diesel fuel turbine generator kicks in to replenish the battery pack. Transit officials are so far very pleased, as the EcoSaver IV is chalking up big savings on fuel costs. Baltimore currently has 12 EcoSavers in service, with a total of 21 on order. They're already being used on two of the three Charm City Circulator routes and are proving even more popular with riders than transit officials expected, providing residents of Charm City a big eco-friendly lift.

A new green initiative is underway at the Buffalo Niagara Medical Campus in upstate New York. More than 20 General Electric Level 2 EV charging stations have been installed in parking garages and side streets for public use. The stations were partially funded by a federal grant through a consortium of upstate New York Clean Cities coalitions. Organizers hope the new stations will lay the groundwork for an EV corridor to nearby cities.

MARK MCGOVERN: If I need to stop somewhere and get a charge for the night, I'm going to stay in a hotel in Buffalo or I'm going to leave my car over at the medical campus overnight and charge my vehicle, so I'm ready to go come the next morning. 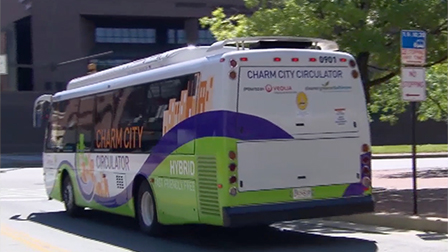