This is a text version of the video segment Electric Trolley Boosts Business in Bakersfield, California, which aired on April 22, 2010.

JOHN DAVIS: Our success story of the week comes from Bakersfield, California, where an electric bus is giving a green boost to downtown businesses. Pacific Gas and Electric donated the refurbished bus customized to look like a historic Bakersfield electric trolley.

The free-ride, 22-passenger trolley makes six stops along its one-mile loop. Powered by 40 deep-cycle, lead-acid batteries, it has a range of 60 miles. Saving 1,250 gallons of petroleum fuel every 10,000 miles, this novel clean vehicle is a joint effort between local government and private enterprise—as well as a reminder of the past.

LINDA URATA: It's been renovated, so it looks like an old downtown trolley. We used to have electric trolleys that ran here 100 years ago—turn of the century—so it's kind of like everything old is new again.

JOHN DAVIS: No wonder Bakersfield residents are so charged up by this true hometown solution to saving fuel and reducing pollution. 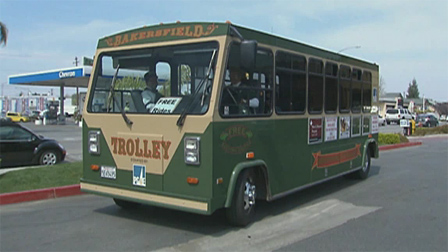