This is a text version of the video segment Greater Portland Transit District Looks Forward with Natural Gas, which aired on Jan. 14, 2017.

JOHN DAVIS: Our success story this week takes us to Portland, Maine, where they have been running on clean compressed natural gas for over a decade.

The Greater Portland Transit District built the state's first CNG station back in 2005, and they haven't looked back.

As the area's only fueling station, other fleets also come to fill up, including Portland Public School buses.

GLENN FENTON: We're a transit agency, so we're not in the business of going out and advocating and trying to draw more partners in, and that's what really they have been able to do. And for this type of project to work, you need to get a critical mass of users together to support the infrastructure and hopefully grow CNG.

JOHN DAVIS: With help from Maine Clean Communities, the agency will replace more older buses in 2018 and plans to have half of their fleet running on CNG in the very near future. 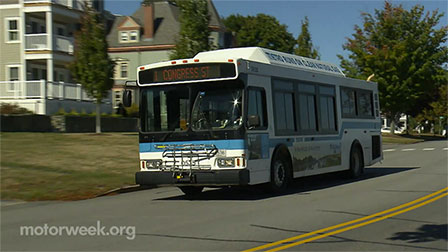