This is a text version of the video segment Hydrogen Powers Fuel Cell Vehicles in California, which aired on Nov. 18, 2017.

JOHN DAVIS: Our success story this week takes us to Sacramento County, California, where they've struck gold by going green.

With one of the nation's leading green public fleets, over 60% of the county owned vehicles run on alternative fuel or advanced technology.

Now, the county is one of the first to incorporate hydrogen into their fleet by buying 4 Toyota Mirai fuel cell sedans. With an over 300 mile range and zero emissions, these Mirais pack a powerful environmental punch. And with help from Sacramento Clean Cities, rebates and incentives cut their bottom line too.

KEITH LEECH: No government agency would typically buy a $57,000 vehicle for a motor pool unit, but because of the incentives available from Toyota, the price of that vehicle actually got down to be competitive with the vehicles that we replaced, a conventional hybrid vehicle.

JOHN DAVIS: With over 30 public hydrogen fueling stations across California, and 100 planned, infrastructure is growing, paving the way for a California future powered by fuel cells. 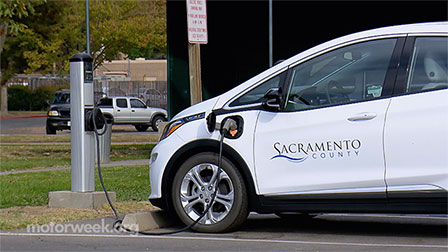