The chargers are a major draw for tenants and make the units more valuable.

Green Rock Apartments in Minneapolis, Minnesota, markets itself as "eco-conscious urban living," with features and amenities such as solar panels, energy-efficient lighting and free low-watt light bulbs for tenants, bike parking, on-site composting and recycling services, and community gardens. Owner Dale Howey keeps his ear to the ground for strategies that will reduce emissions and appeal to residents interested in doing the same. When plug-in electric vehicles (PEVs) began gaining popularity in 2013, Howey sought out opportunities to install chargers at his properties.

"I knew it was the right thing to do," said Howey. "And these amenities increase the value of our buildings and attract like-minded individuals who want to do right by the planet."

The first building where the company installed chargers was its Downtown – Lofts location. For this location, the company took advantage of a Nissan incentive program, which eventually led to 20 new chargers in the Minneapolis area, including 19 other destinations. The program provided a free DC fast charger, so the company only needed to hire a certified electrician for installation. This charger is on the Greenlots network and is open to the public for a fee.

After the initial project with Nissan, Green Rock Apartments installed Level 2 charging at three additional multi-unit dwelling (MUD) buildings and at their corporate offices. The company purchased between one and four Level 2 charging units per building at the cost of approximately $600 per unit and paid an additional $400 per unit for installation. In the four MUD buildings equipped with charging as of January 2019, there are 97 housing units.

During the procurement process for the Level 2 stations, Green Rock Apartments considered networked options, which would have allowed for payment, but opted against the extra cost. "We just weren’t sure we were going to have the user volume for us to justify the cost of a networked system," explained Howey. Instead, the company opted for a more affordable non-networked option and offers charging for free to its tenants. The cost of charging at the Level 2 chargers is included in their rent (at no additional cost) and PEV owners also get free parking.

In addition, all tenants are eligible for a $2,000 credit towards the purchase of a PEV. A total of 15 tenants have taken advantage of this incentive. At Green Rock Apartments’ largest building, residents in five of the 48 units have PEVs.

The chargers are primarily for tenant use but are also available to the public in case of emergency. Signage indicates that parking is for charging PEVs only.

While the chargers do not have a separate maintenance plan, beyond the warranty offered with the equipment, Green Rock Apartments has not had any issues in five years of use. Howey and his staff monitor to make sure the equipment is not misused, and snow is removed in the winter.

Howey and his staff also use the chargers to power the company’s all-electric Nissan LEAFs, as well as their all-electric Polaris RANGER side-by-side equipped with a plow for snow removal and a bucket for summer landscaping work.

"The chargers are a major draw for tenants and make the units more valuable," said Howey. “We have seen a small bump in electricity cost. At the end of the day though, we’re just trying to do the right thing and tenants stick around because of the perks."

Green Rock Apartments will continue installing charging as needed, including more Level 2 units or DC fast chargers if appropriate, and where not viable, Level 1 chargers. 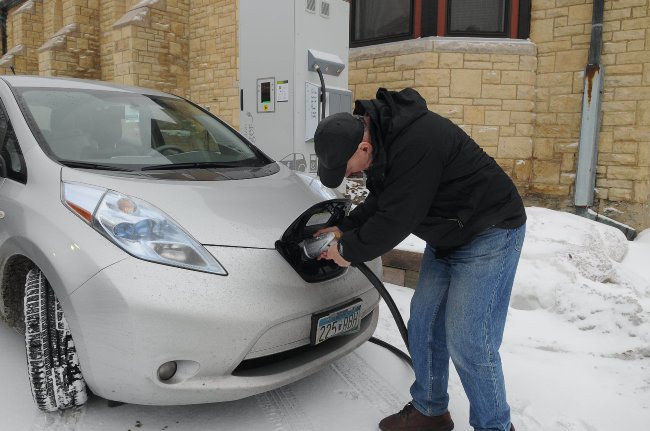