Being first isn’t easy. But the good thing about it is that we worked through all the problems for the next school district. The purpose of the pilot is to learn and do better. We identified the problems and Lion addressed them.

Every school day, more than 25 million U.S. students catch the big yellow bus. In 2016, that familiar trip changed for some students in Massachusetts who are riding new electric school buses.

Combined, the three buses traveled approximately 14,000 miles and provided transportation for 279 days. Though the pilot has ended, the school districts still operate the electric buses and DOER continues to evaluate their impact. During the pilot, the life cycle greenhouse gas (GHG) emissions were about half of what emissions from diesel buses would have been. As the Massachusetts grid mix incorporates larger sources of renewables, those emissions benefits will increase. Additionally, bus efficiency ranged from 1.3 to 1.4 kilowatt-hours (kWh) per mile, providing a range of 70 to 80 miles.

While the project included multiple vehicles, the implementation team noted that districts would have each benefitted from having more than one bus. "One bus per district gave us a good flavor to see how it works in different cases," said Stephen Russell, former MCC director. "But we recommend piloting a few buses in the same location. With only one bus, every little issue will take it off the road. Having redundancy, trained staff, and parts all in one location will make it easier." For more valuable insights, see the section titled "The Learning Continues."

Once each district selected an equipment manufacturer, it took approximately three months to build the buses. The charging infrastructure, however, lagged behind. "While the schools were able to purchase charging stations from the state contract, each had to bid out the installation, which slowed the process down," Russell said. "The buses arrived, and we had no infrastructure in place."

"When our bus arrived, it sat for approximately five months while charging station contracts were pulled together," said Brian Foulds, an electric technology champion for Concord. "Don’t underestimate how long it’ll take for the charging stations to be installed. Fleets may say ‘we’ll get to that when the bus arrives,’ but we learned that it’s better to do both in tandem rather than in series."

Fleets benefit from coordinating with their local utility to understand the electrical side of things, from possible upgrades to rate structures and demand charges. "We also learned a big lesson about demand charges, which accounted for a significant portion of operating costs," Russell said. Demand charges apply to commercial electricity usage customers and are based on the highest usage recorded at any time in the month. One way to avoid these costs is to charge the buses outside of peak demand times.

In addition, the buses consumed excess energy from fans and heaters used to cool and heat the batteries during charging. Fueling costs were anticipated to be lower for the buses, but these loads and unmanaged charging shifted the scales. "We estimated that energy costs were 63% higher than necessary," Russell said. One of the lessons learned from the pilot is that buses should be charged at night, rather than during the day when electricity use is already high.

"When the electric fleet grows, we will address topics like scheduled charging and V2G," Foulds said. "Ideally, we will have software that can manage the state of charge based on the bus duty cycles and help reduce peak load at the substation level. This will allow drivers to simply plug in the bus when not in use and always know the bus will be charged when needed."

Many Motivations for Deployment

In addition to determining whether the technology was market ready, Russell said the pilot sought to determine the real-world GHG reductions, fuel efficiency benefits, operational costs compared to diesel buses, and V2G capabilities for a school district.

The school districts had similar motivations for getting involved. "The mission for Concord was to explore a fuel that can reduce the health and environmental impact of busing students," Foulds said.

"For our district, the school bus fleet accounts for approximately 8% of all municipal sector GHG emissions," Foulds said. To maximize emissions benefits, Concord deployed the bus along a route for students using the wheelchair lift. "One of the great benefits is that there are no fumes when using the lift. Diesel school buses have to idle to lift, but the lift on electric school buses is battery powered."

While the purchase price is high, electric buses can help lower maintenance and fueling costs. "When paired with V2G capabilities in the future, our long-term goal is to reduce electrical utility peak load while buses aren’t in use," Foulds said.

Amherst Regional Public School District operates its own vehicles and has a relatively small, 10-vehicle fleet supported by a single technician. Their electric bus traveled an average of 34 miles per day.

The Cambridge Public School District is privately operated and transports 2,500 students. Their electric bus was incorporated into regular bus operations and covered roughly 45 miles a day.

Concord Public School District buses are in operation for up to three-hour intervals to transport over 3,400 students from Concord, Carlisle, and two local private schools. Their electric bus traveled approximately 45 miles per route.

"Each fleet used a well thought out request for proposal, developed by VEIC, to go out to bid for the school bus," Russell said. The specifications covered battery size, range, safety regulations, and warranty terms and conditions. Each school district is different in terms of size and operational structure (see box), providing a diverse set of scenarios for implementation.

The only original equipment manufacturer with electric school buses in 2015, the Lion Electric Company (Lion) was awarded the contract for all three demonstration sites. As of 2020, four manufacturers are at the table, including Lion, Blue Bird Corporation, IC Bus, and Thomas Built Buses.

The Lion buses used in the pilot included four batteries that provide 104 kWh of energy storage with an estimated range of 75 miles. The batteries are warrantied for 160,000 kWh or eight years.

Amherst, Cambridge, and Concord all had reliability or mechanical issues, ranging from noisy cooling fans, to charger failures, to bus breakdowns while in service. One of the biggest challenges was working with a company that did not have a local presence. "Because Lion is based in Canada, anytime a part was needed, it took three days, and sometimes even two weeks, to get to us," Russell said. "If a mechanic was needed, they had to be sent from Canada, which extended downtime and created difficulties."

Even over the course of the pilot, the technology advanced. The buses Massachusetts school districts received were early models and different from the Lion buses in production at the pilot’s conclusion. Lion learned from the issues the school districts experienced and worked to improve their technology.

Almost all the technical issues the fleets experienced stemmed from being one of the first electric school bus projects in the United States. "Being first isn’t easy," Foulds said. "But the good thing about it is that we worked through all the problems for the next school district. The purpose of the pilot is to learn and do better. We identified the problems and Lion addressed them."

After two years of operation, Lion took each bus back to the factory for up to two months and rewired them to fix the issues reported by the districts—a time investment that paid off. In the year since the buses were redelivered, there were no operational issues. "When the bus returned from Canada, it was running great and continues to over a year later," Foulds said. "We’re not even experiencing small issues. Everything is operating as expected."

Lion recently opened a parts and maintenance facility in Albany, New York, which will allow for easier servicing. Some of the early issues, however, could have been negated with an experienced technician or driver. Russell advised fleets interested in deploying electric school buses to ask the manufacturer to provide an experienced electric bus technician and driver for training at the start. "It takes time to figure out the differences, and a trained driver and technician can facilitate a quick transition," he said.

Following the rebuild, each bus was equipped with telematics, which transmit use data to DOER. Amherst, Cambridge, and Concord continue to operate the electric school buses and report data weekly to DOER, including kWh consumed and miles travelled per week. MCC is working to analyze the data and provide an update on emissions impacts and maintenance costs.

Through a vehicle lifecycle cost comparison, Concord is developing a plan to transition 80% of its bus fleet to electric. The second bus is expected to arrive in 2020. No doubt future deployments—in Concord and more broadly—will benefit from the lessons learned from the Massachusetts pilot. 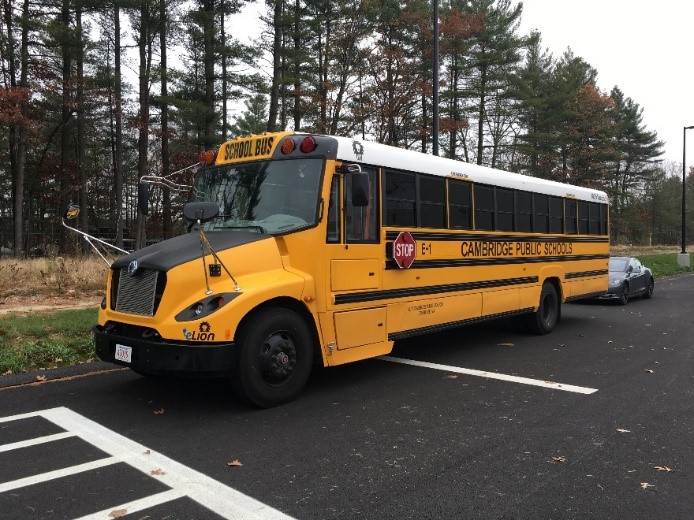