This is a text version of the video segment Cherokee Nation EV Initiatives, which aired on June 16, 2021.

JOHN DAVIS: We hear the phrase “we’re all in this together” a lot these days. And that certainly applies to preserving our precious natural resources. This week, we see how those with the longest ties to our natural history are taking bold steps to ensure a clean future.

The Cherokee Nation is located in a 9,000 square mile area of northeastern Oklahoma. Unlike other reservations, Cherokee tribal land is checkerboarded in and around state jurisdictions, and Cherokee citizens are very much a part of the local communities. So maintaining their own civic infrastructure and preserving Cherokee culture while keeping pace with modern society is a vital task.

CHUCK HOSKIN, JR.: Well, our belief, and it’s one that’s held our people together for generations, is that we look seven generations into the future. We look at what our actions today are doing for generations from now. And I think in the world we live in today, it’s important to reduce our carbon footprint, and look for avenues to explore green energy, and I’m standing next to our solar canopy, which is one of our key initiatives to meet that objective, reduce that carbon footprint, think ahead to future generations, to make sure that this reservation, that we’re on right now, is going to be clean and pristine. Hopefully cleaner as we go by, thanks to these kinds of initiatives for generations into the future.

JOHN DAVIS: The Indian Nations Council of Governments is also home to the Tulsa Area Clean Cities Coalition, easing the way for the Cherokee Nation and other tribal partners to team up through Clean Cities on a number of clean vehicle projects.

It generates up to 58,000 kilowatt-hours per year and augments grid power supplied to the buildings when not used for charging vehicles.
When it was installed, there were actually very few electric vehicles registered in the area, but in a classic case of “build it and they will come,” the local EV population, and demand for charging, has grown rapidly.

JOHN DAVIS: Once complete, the solar site’s electric vehicle charging capacity will be doubled to 16.

The Cherokee Nation’s EV Initiative also includes four DC fast chargers and additional level 2s, installed or planned for tribal lands throughout the area, as well as a significant investment in public transportation.

CHUCK HOSKIN, JR.: So we have an electric school bus here in the Cherokee Nation. I think it’s the first in the region. We have some electric transit buses, which we think are the first for a rural-based transit system in the United States.

JOHN DAVIS: With just 2000 fluent speakers remaining, attrition of tribal elders through natural causes and from the COVID pandemic has threatened the very viability of the Cherokee language for the future.

This electric school bus transports students in the Cherokee Nation’s groundbreaking language immersion program, where new generations of native speakers are being trained to teach others and keep this vital link to the past alive.

These newly-arrived Proterra electric transit buses carry bilingual signage throughout the interior to act as a reminder to all of the importance of not just preserving, but continuing Cherokee traditions.

CHUCK HOSKIN, JR.: If you go elsewhere in the reservation, you’ll see community organizations that are really the hub and the lifeblood of these little communities that again have existed since before the state of Oklahoma was here.

We have to connect people, from home to work and home and the health centers. Doing that in an environmentally sustainable way is important, and these transit buses are a big part of that.

And there’s a little bit of a teaching moment about where does energy come from, how do we harness something like the sunlight to power this little community. So, those sorts of things, I think, are sparking some interest among young people, which is of particular interest to me, because they’re the ones who are going to take on leading this nation in the future. 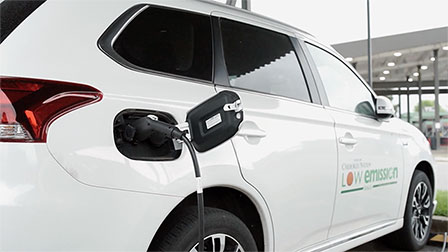