“Round two locations were specific because we wanted to get chargers in locations where they otherwise wouldn’t be located.”

Oklahoma is achieving unprecedented success in building out their electric vehicle (EV) charging network. Since 2018, the state experienced the largest growth of EV charging ports in the nation, with a 122% increase in 2020 alone. The state’s alternative fuel infrastructure tax credit spurred initial development, which was further catalyzed through the quick dissemination of the Volkswagen Mitigation Trust (VW) funds by the Oklahoma Department of Environmental Quality (DEQ), in collaboration with local Clean Cities coalitions. DEQ’s ChargeOK grant program distributed $3.1 million for EV chargers from 2019 through 2021, resulting in 90 new DC fast and dual-port Level 2 charging stations.

“Through the ChargeOK program, the DEQ helped open the whole state to EV travel, including some rural areas where drivers may have the most to gain from driving EVs, due to their high mileage,” said Adriane Jaynes, a former coordinator for Tulsa Area Clean Cities.

This collaboration was key for preparing the state to quickly and efficiently distribute the VW funding. In particular, the Clean Cities coalitions were central to driving conversations with the OSEE and mobilizing feedback from stakeholders and the general public. The VW settlement allowed states to spend up to 15% of funding on charging installation, so Oklahoma’s collaborating agencies unanimously agreed to focus the full amount allowable on growing the state’s charging network.

Prior to the release of the VW funding, ODOT submitted applications to the Federal Highway Administration’s Alternative Fuel Corridor program to designate multiple major highways as EV “corridor-pending” corridors. This helped DEQ identify gaps in charging infrastructure so awarded funds could make the biggest impact for EV drivers. OCC also amended the Oklahoma Administrative Code to allow the resale of electricity for EV charging station owners and operators.

DEQ announced the first round of ChargeOK funding in November 2018 after an extensive public comment period and discussions among the working group members. The application selection criteria prioritized EV charger installation on designated FHWA “corridor-pending” highways, access to amenities such as bathrooms and food, and a minimum EV charging power output. The initial application period was open for approximately four months, after which the program awarded $1.93 million to fund 56 DC fast chargers at 22 locations and 21 dual-port Level 2 charging stations at five locations.

“One key to program success was centering EV drivers in the build out,” said Eric Pollard of Central Oklahoma Clean Cities. “It is important to get into the mindset of drivers to really understand how chargers will meet their needs.”

DEQ announced a second round of ChargeOK funding in July 2020 to distribute the remaining VW dollars. The goal of this second round was to fill in the gaps in the corridor network with DC fast charging stations. The requirements for round two were consistent with round one, except DEQ identified specific locations on the corridor where stations should be sited.

“Round two locations were specific because we wanted to get chargers in locations where they otherwise wouldn’t be located,” said Leon Ashford, DEQ Environmental Programs Specialist. “For example, we added one to Broken Bow, a great vacation spot in the eastern part of the state that doesn’t have another charger within a 50-mile radius.”

Because of the success of the first round and the ensuing media coverage, the second opportunity was highly competitive. DEQ dispensed funding for an additional 13 DC fast charging stations at seven locations.

In total, DEQ estimated the program will help reduce 31,600 metric tons of CO2 emissions over the first five years in operation.

Francis Energy (Francis) installed a total of 54 stations in 19 locations through both rounds of ChargeOK funding. Originally founded as Francis Oil & Gas in 1934, and relaunched as a solar power company in 2015, Francispivoted once leadership saw the potential for EV charging to be a low-cost alternative to petroleum fuels, particularly in Oklahoma. In 2018, Francis developed an EV charger sales and leasing program, leveraging the Oklahoma state tax credit that covered 45% of the cost of installing commercial alternative fuel infrastructure. Once DEQ announced the ChargeOK program funding, Francis stacked the tax credit and grant funding to electrify a large portion of state-designated EV corridors.

Francis reached out to over 2,000 companies in Oklahoma to find site hosts for their EV chargers. During the first round of ChargeOK funding, Francis installed 52 DC fast charging stations but only requested 15% reimbursement rather than the 80% being offered by the program because a substantial portion of installation costs were covered by the state tax credit. Stacking the tax credit with ChargeOK funding greatly increased the number of stations they could install.

Central Oklahoma Clean Cities attributes the success of the ChargeOK program to the creative thinking of stakeholders, like Francis Energy, who leveraged available funding.

VW funding investments spurred the growth of the EV charging market across the state. The chargers funded through the ChargeOK program represent only 10% of the station growth in Oklahoma since 2018. Oklahoma is now poised for rapid adoption of EVs, with the potential to greatly reduce the state’s carbon footprint.

Oklahoma is also leading the way in renewable electricity generation. Around 41% of state electricity is produced through wind power, making it now the state’s largest source of electricity. Pairing EVs with the state’s high generation of renewable wind power capitalizes on the well-to-wheel emissions benefits of an EV. Additionally, wind turbines generate high power output at night when customers are most likely to charge their EVs, which reduces strain on the electricity grid.

While it is hard to correlate the EV charger installations with EV registrations, Tulsa Area Clean Cities is excited about one recent milestone. “There is now at least one EV registered in every county,” Jaynes said.

Tune in to a Clean Cities podcast episode to hear more about Oklahoma's charging infrastructure growth from Eric Pollard and Leon Ashford. 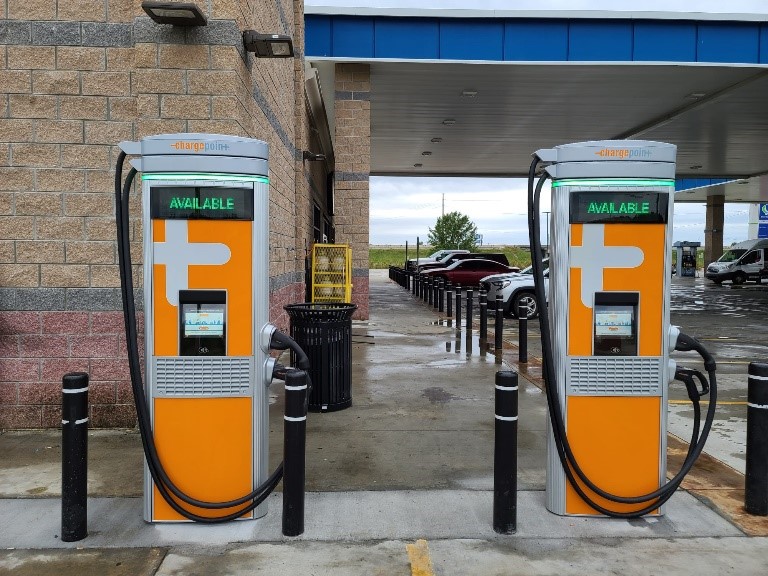