This is a text version of the video segment Propane Powers Airport Shuttles in New Orleans, which aired on Feb. 19, 2011.

JOHN DAVIS: Our success story this week takes us to the Big Easy and the Louis Armstrong New Orleans International Airport, where they use 27 propane-powered vans and minibuses to annually shuttle more than 400,000 passengers to and from area hotels.

The shuttle service first used this cleaner-burning fuel back in the '90s with the current converted fleet introduced in 2008. Company officials say they prefer propane over diesel, citing a cost savings of nearly a dollar a gallon plus lower emissions and maintenance cost.

DON DUVERNAY: It's a cost-effective, more environmentally conscious way to go, and we feel that's how we want to run the operation.

JOHN DAVIS: The shuttle service displaced over 139,000 gallons of petroleum fuel with clean propane in 2010. Working with the Southeast Louisiana Clean Fuels Partnership, four more alternative fuel buses will be added this year, boosting the shuttle's role as a green welcoming committee for visitors to the Crescent City. 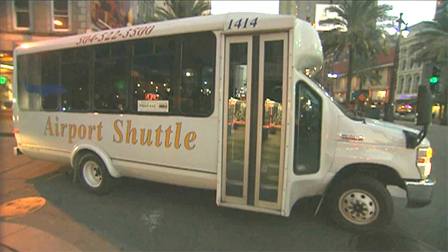