This is a text version of the video segment Boulder Commits to Alternative Fuel Vehicles, which aired on June 8, 2012.

JOHN DAVIS: Our success story of the week comes from Boulder, Colorado, with a city-wide commitment to alternative fuel vehicles. This lineup of flex fuel police cars and light-duty pickups is a small sampling of the nearly 200 alt fuel vehicles put into service since 2001. Along with E85, many of Boulder's maintenance trucks and street sweepers use B20 biodiesel. Propane is also part of the alt fuel mix.

JOE CASTRO: And what that does is it looks at building a smarter electrical infrastructure with not only plug-in hybrids but also renewables, such as solar.

JOHN DAVIS: Nearly 60% of Boulder's fleet is already alt fuel with a goal of 100%—a goal that will help ensure Boulder's Rocky Mountain view stays majestic. 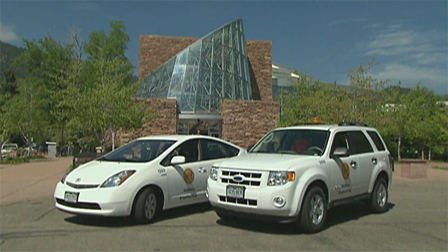