This is a text version of the video segment Dallas Airport Operates With Alternative Fuels, which aired on Sept. 5, 2009.

JOHN DAVIS: Our success story of the week is from the Dallas/Fort Worth International Airport. With more than 700,000 takeoffs and landings a year, DFW is the third busiest in the world. Covering 29 square miles, DFW is a mini-city with more than 500 service vehicles, most of which operate on compressed natural gas. An onsite CNG refueling station—built in 2000—makes it easy for airfield sweepers like this one to stop in and fill up.

DFW CNG usage replaces about 1.7 million gallons of gasoline and diesel annually, keeping their shuttle buses and other CNG vehicles up and running cleanly. Employees also use hybrids to travel throughout the airport—all to make the blue Texas skies even bluer. 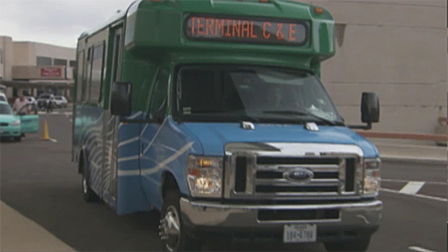