This is a text version of the video segment Propane Powers Fleets Across the Nation, which aired on Nov. 1, 2013.

JOHN DAVIS: The environmental and cost benefits of propane make it a popular alternative fuel, especially for fleets. In Toledo, Ohio, one of the nation's largest private medical transport providers made a big commitment to propane. MedCorp EMS desired a clean fuel fleet, but since their call center handles critical 911 service for many communities and dispatches over 1,500 ambulances daily, they couldn't risk compromising vehicle reliability. Their solution is a bi-fuel conversion using propane as the primary fuel, but retaining the vehicle's existing gasoline system for emergency backup. This led not only to a greener fleet, but a new business opportunity as well.

FRED ISCH: We found the propane to be the best fit for us. We've converted a large amount of our fleet to that product. It's been very successful in saving us money and improving our economic position and our environmental position. We were so happy with the product we then began to install and market it to outside companies, even competitors, cities, anyone else who could be interested in a fleet application of propane.

JOHN DAVIS: Sounds like a win-win situation. Domestically produced propane is cleaner and cheaper than gasoline and actually improved MedCorp's fleet maintenance profile. We applaud MedCorp for leading by their green example.

Not far away, in Southeast Michigan, we found a ground transportation provider at the forefront of alternative fuel company fleets. Beginning in 2007 Metro Cars invested $500,000 to convert 75 vehicles to propane. Federal tax incentives made it easier for the Detroit-based limo and shuttle service to switch to clean fuels. In 2010 the company partnered with the Clean Energy Coalition, the region's Clean Cities coordinator, and leveraged their local dollars with a federal grant to expand propane operations to Grand Rapids. They installed additional fueling stations and converted another 90 vehicles, including luxury sedans, SUVs, and shuttle buses.

DAVE SATAWA: It's definitely a win-win. Propane burns cleaner, and it's cheaper. So it's a benefit to our drivers and to the company.

JOHN DAVIS: Metro Cars alt fuel fleet displaces more than 520,000 gallons of petroleum annually, proof that a leading transporter is also leading the way in the use of green fuels in the Motor City and beyond.

TOM WURDACK: As we replace units, if we like what we see and the model pans out, we'll continue to push propane as a primary motor fuel for now and in the future.

JOHN DAVIS: The Kansas City Regional Clean Cities coalition helped Renzenberger with technical training and resources. The company is saving nearly $2 a gallon by using propane. They also like the environmental benefits of the cleaner-burning fuel. So riding the rails in the Sunflower State just got a little bit greener.

In the idyllic town of Bar Harbor, Maine, propane fuel can take you from the summit to the sea if you ride aboard the Island Explorer's fleet of shuttle buses. Down East Transportation acquired their first propane buses in 1999 as part of a federal grant designed to ease traffic congestion and improve air quality. Their current fleet of 35 buses travels eight preplanned routes, taking visitors from their lodgings to a downtown Bar Harbor bus depot and then out to various must-see sites, like Jordan Pond and Acadia National Park.

PAUL MURPHY: We need to be able to purchase vehicles that will both serve our needs and get the job done, but will be cost effective and clean.

JOHN DAVIS: Down East Transportation's new Gold LEED-certified headquarters includes a covered fueling station and an 18,000-gallon propane tank. Island Explorer works with a number of state and federal stakeholders, including the outdoor gear experts at L.L. Bean, all helping to make the Pine Tree State greener than ever.

Williamson County, Texas, has added 22 bi-fuel Chevrolet Tahoes for their constables and other services. A Department of Energy grant helped to pay for the propane auto gas conversions and five propane fueling sites around the county. A simple dash switch makes for a seamless transition between fuels. The county cites fuel savings of close to $70,000 a year using the locally produced fuel.

CYNTHIA LONG: We buy our fuel from Texas, and so we're producing Texas jobs and reducing our dependence on foreign oil. And then it's cleaner-burning, and we're in an area that is near non-attainment, and so the less that we're putting into the air is good for all of us. 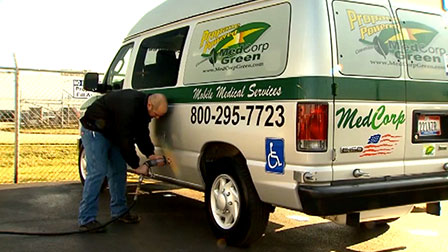