This is a text version of the video segment Companies Power up Through Workplace Charging Challenge, which aired on Jan. 21, 2014.

JOHN DAVIS: About half of the passenger cars in the U.S. have access to an electrical outlet where they park overnight, meaning the basic infrastructure for electric vehicle recharging is in place.

But during the day when those same cars hang out at work or school, EV charging can be a hit-or-miss proposition, as power outlets have not traditionally been found in these locations. To help remedy this, the U.S. Department of Energy has created the Workplace Charging Challenge.

This program calls for forward-looking companies to assess the charging needs of their employees, commit to providing charging access at one or more major work sites, and also to share their progress and best practices to encourage others to follow suit.

For online shoe and clothing retailer Zappos.com, this initiative fit right in to their plans for a just-completed state-of-the-art headquarters in Las Vegas. This ultra-cool office space, complete with rooftop lounge and coffee bar, efficient open-plan work areas, and free bouncy balls in the courtyard, is actually re-imagined and recycled from the former Las Vegas City Hall and jail.

The central urban location encourages many employees to stroll or roll to work, and adding EV chargers to the mix was a natural fit.

BRAD TOMM: At Zappos, it's part of our culture to build EV charging stations, which is a good fit for how our employees get to work, either by commuting, carpooling, on their bike, or driving an electric vehicle. Hopefully someday all of the vehicles will be electric.

JOHN DAVIS: Zappos only has a few users for their EV chargers at the moment. But as the saying goes, build it and they will come. And nowhere is that being proven more convincingly than in Atlanta, Georgia.

Coca-Cola is already known as an environmental leader for their use of hybrid electric delivery trucks in the field. And at their home base in downtown Atlanta, a makeover is underway to make this complex a LEED-certified green urban oasis. But as progressive as they are, even Coke is surprised at how quickly their employees are embracing the EV commuting choice.

JULIE SEITZ: We started very small. We just started with a handful of chargers, and we only had about four cars here at our world headquarters. And in just an 18-month period, we're up to almost 80 cars. And they're growing at a rate of about one or two a week.

Now charging stations, it's kind of hard to put them in quite as fast as one or two a week, and so we're kind of seeing how this goes, but we're up to about 26 chargers, and we've created a little community of these electric car owners, and they've decided on their own they're going to share the charging stations morning and night.

JOHN DAVIS: Nissan, maker of the popular LEAF all-electric car, has installed EV chargers on site at their North American headquarters in Tennessee and made them available to employees and to the public as well. They recently documented a day in the life of this hardworking appliance and found an interesting mix of users.

JOHN DAVIS: Dozens of other U.S. companies have already taken up the workplace charging challenge on their own, or through this DOE initiative. And with results as promising as these, it looks like the EV infrastructure puzzle will soon be solved for good. 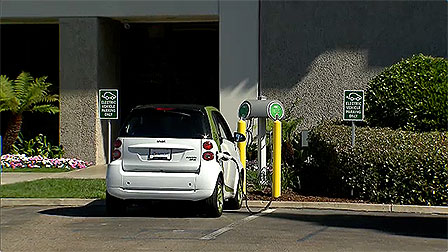