This is a text version of the video segment Los Angeles Public Works Fleet Converts to Natural Gas , which aired on May 30, 2015.

JOHN DAVIS: Our success story this week takes us to Los Angeles, California, where the city's "Clean-Fuel Policy" prompted the Public Works Department to convert its fleet of diesel-powered, solid waste collection vehicles to alternative fuels. Of their 700 refuse trucks, nearly 80% run on compressed or liquefied natural gas, with a goal of 100% in the near future. The city is saving over $6 million a year on fuel. With its sixth refueling station just opened, LA has one of the largest municipal fleets of natural gas solid waste collection vehicles in the nation. These four 15,000-gallon LNG tanks serve one yard alone.

ALEXANDER HELOU: We have to make sure we have enough storage capacity on site so if there's an earthquake, our trucks are going out, cleaning the debris before the first responders go out.

JOHN DAVIS: Serving 4 million residents is not easy. Nor is converting a big fleet to alt fuels. But in LA, adopting clean fuels for cleaner air is a "no-brainer." 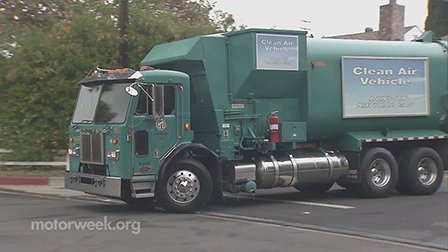