This is a text version of the video segment Colorado Airport Relies on Natural Gas Fueling Stations, which aired on July 1, 2010.

JOHN DAVIS: Our success story of the week comes from the sprawling Denver International Airport. The City of Denver designed the 15-year-old airport to be green from the start with compressed natural gas fueling stations and an underground baggage tunnel system that allows only CNG and electric vehicles.

CNG tugs are used for baggage handling, and the yellow, all-electric E-Ride used for trash removal. This Miles electric vehicle is currently being evaluated for tunnel use. All vehicles have to test clean on a dynamometer before a tunnel permit is issued.

There are also over 100 CNG light-duty maintenance trucks along with 180 bi-fuel gasoline/CNG trucks. The latest to land in Denver are these police mobility vehicles. The all-electric PMVs look like Segways on steroids and are being used for traffic control.

CNG also powers employee, rental car, and parking lot shuttles, as well as airfield sweepers. It all makes for a versatile lineup of cleaner, greener vehicles working their way around DIA. 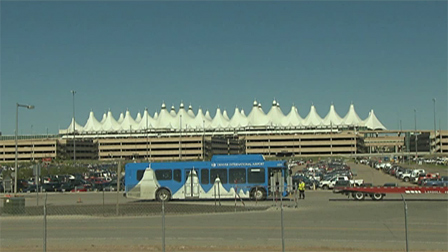