This is a text version of the video segment Mammoth Cave National Park Uses Only Alternative Fuel Vehicles, which aired on Dec. 1, 2012.

JOHN DAVIS: Our success story this week comes from Kentucky's Mammoth Cave National Park. In 1999, the park committed to use E85 ethanol in a number of their flex-fuel vehicles and installed their own refueling station.

Today, more than a decade later, all of the park's 41 vehicles run on alternative fuels, including biodiesel, propane, and electricity.

The park has converted seven gasoline school buses to propane. They transport 200,000 visitors a year to cave entrances. Rangers use these GEM EVs to patrol campgrounds and assists with parking.

Since the mid-'90s, Melissa Howell from the Kentucky coalition has worked closely with the park to develop their alternative fuel and advanced technology initiative—an effort that made Mammoth Cave the first National Park Service unit to deploy a project under the Clean Cities National Parks Initiative. 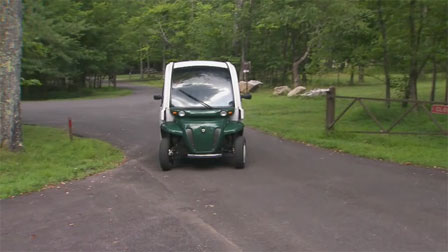