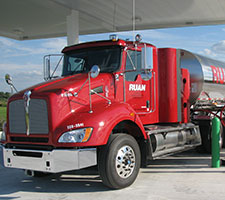 This milk transport truck fuels up at a renewable natural gas station. Photo from ampCNG

Biomethane, which is another term for this purified pipeline-quality fuel, refers to biogas that has also been cleaned and conditioned to remove or reduce non-methane elements. Biogas is produced from various biomass sources through a biochemical process, such as anaerobic digestion, or through thermochemical means, such as gasification. With minor cleanup, biogas can be used to generate electricity and heat and is used as a replacement for traditional natural gas to generate combined electricity and heating for power plants—not in vehicle applications.

To fuel vehicles, biogas must be processed to a higher purity standard. This process is called conditioning or upgrading, and involves the removal of water, carbon dioxide, hydrogen sulfide, and other trace elements. The resulting RNG, or biomethane, has a higher content of methane than raw biogas, which makes it comparable to conventional natural gas and thus a suitable energy source in applications that require pipeline-quality gas, such as vehicle applications.

For a comprehensive list of projects that are upgrading gas for pipeline injection or use as vehicle fuel, see the Renewable Natural Gas Database developed and maintained by Argonne National Laboratory.

Landfills are designated locations for disposal of waste collected from residential, industrial, and commercial entities. Landfills are the third-largest source of human-related methane emissions in the United States, according to the U.S. Environmental Protection Agency (EPA). Biogas from landfills is also called landfill gas (LFG), as the digestion process takes place in the ground rather than in an anaerobic digester. As of September 2021, there were 548 operational LFG projects in the United States, according to the EPA. However, most of these projects use biogas to produce electricity rather than power natural gas vehicles.

Biogas recovery systems at livestock operations can be used to produce RNG. Animal manure is collected and delivered to an anaerobic digester to stabilize and optimize methane production. The resulting biogas can be processed into RNG and used to fuel natural gas vehicles or produce electricity.

As of August 2017, there were about 250 anaerobic digester systems operating at commercial livestock farms in the United States. Most of these facilities use biogas for electricity generation. A few farms are using biogas to produce transportation fuel, including Hilarides Dairy in California and Fair Oaks Farms in Indiana. EPA's AgSTAR database provides more information about the use of such systems in the United States.

Biogas can be produced by digesting the solids removed in the wastewater treatment process. According to EPA estimates, this biogas potential is about 1 cubic foot of digester gas per 100 gallons of wastewater. Energy generated at U.S. wastewater treatment plants (WWTPs) could potentially meet 12% of the national electricity demand, according to a study released by the National Association of Clean Water Agencies, the Water Environment Research Foundation, and the Water Environment Federation. This could spur some production of RNG for vehicle use as well.

There are more than 16,000 WWTPs in the United States, but only about 1,300 have anaerobic digesters and of those, 860 have the equipment to use their biogas on site. The Janesville Wastewater Treatment Plant in Wisconsin is an example of a plant that uses biogas to produce RNG for use in vehicles.

Other Sources of Biogas

Other sources of biogas include organic waste from industrial, institutional, and commercial entities, such as food manufacturing and wholesalers, supermarkets, restaurants, hospitals, and educational facilities. Learn about the City of Perris, California, biodigester, that produces enough RNG to fuel their fleet of 900 vehicles.

Biogas can also be produced from lignocellulosic material (such as crop residues, woody biomass, and dedicated energy crops) via thermochemical conversions, co-digestion, and dry fermentation. These technologies are underway in Europe, with limited applications in the United States.