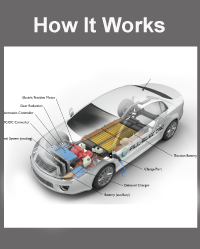 All-electric vehicles, also referred to as battery electric vehicles (BEVs), use a battery pack to store the electrical energy that powers the motor. The batteries are charged by plugging the vehicle in to an electric power source. Although electricity production may contribute to air pollution, the U.S. Environmental Protection Agency categorizes all-electric vehicles as zero-emission vehicles because they produce no direct exhaust or tailpipe emissions.

Both heavy-duty and light-duty all-electric vehicles are commercially available. BEVs are typically more expensive than similar conventional and hybrid vehicles, although some cost can be recovered through fuel savings, a federal tax credit, or state incentives.

Today's all-electric vehicles generally have a shorter range (per charge) than comparable conventional vehicles have (per tank of gas). However, the increasing range of new models and the continued development of high powered charging equipment is reducing this gap. The efficiency and driving range of BEVs varies substantially based on driving conditions. Extreme outside temperatures tend to reduce range, because more energy must be used to heat or cool the cabin. All-electric vehicles are more efficient under city driving than highway travel. City driving conditions have more frequent stops, which maximize the benefits of regenerative braking, while highway travel typically requires more energy to overcome the increased drag at higher speeds. Compared with gradual acceleration, rapid acceleration reduces vehicle range. Hauling heavy loads or driving up significant inclines also has the potential to reduce range.