JOHN DAVIS: Our success story this week takes us to St. Louis, Missouri, the home of fleet operations for AT&T. In 2009, the telecom giant pledged to add 15,000 alternative fuel vehicles in 10 years. In March of 2014, a milestone was reached when the 8,000th compressed natural gas vehicle arrived.

Their CNG fleet ranges from fuel transfer trucks to service tech vans. Most fueling is done at public access CNG stations to support the industry and encourage use. AT&T now has over 10,000 various alt-fuel vehicles, like gasoline-electric hybrids, extended-range electrics, and pure electric vehicles.

KATIE DUNGAN: We see compressed natural gas as being a step in the right direction. It's a fuel that we can use today that's cleaner, that's cheaper, and that's domestic, and that's available. So putting all those benefits together really helps it make a strong case for us to use CNG in our fleet. 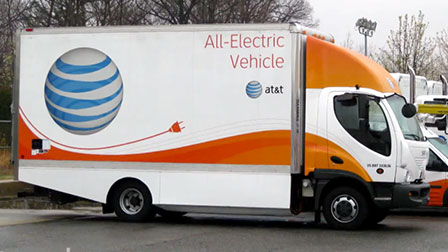