This is a text version of the video segment Freedom CNG Reduces Emissions with Natural Gas in Texas, which aired on April 1, 2017.

JOHN DAVIS: Our success story this week takes us to Texas, where everything is bigger—including the boom for alternative fuels. Freedom CNG opened their first station in 2012 and today has four stations across the state.

With help from the Houston-Galveston Clean Cities Coalition, the company was able to secure federal funds to help install this compressed natural gas refueler right across the street from the Houston Distributing Company.

The beverage wholesaler's CNG fleet includes everything from light-duty vans to big rigs—all displacing over 700,000 gallons of diesel per year.

Kenneth Garland: It's a better fueling experience. They don't smell like diesel. The tractors are quieter. It's been a positive effect on our drivers and recruiting. 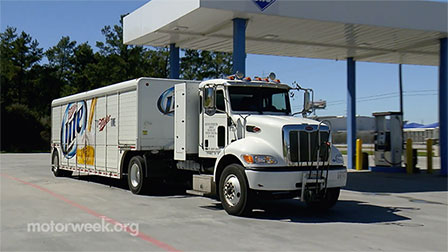