We look at hydrogen because it has zero emissions, as well as battery electric, and renewable natural gas paired with low-NOx engines. These technologies continue to drive advancement.

SunLine has a long history of demonstrating alternative fuels. A 1993 SunLine policy set a requirement that all vehicles purchased by 2040 must be ultra-low- or zero-emission vehicles. The company responded quickly. "In 1994, our transit agency was the nation’s first to switch from diesel buses to an entire fleet of CNG [compressed natural gas] buses," said Tommy Edwards, Chief Performance Officer at SunLine. "We had a depleted fleet to replace, so the policy came at the right time." Shortly after, SunLine became involved with the Clean Cities Coachella Valley Region (C3VR) coalition, a relationship that remains intact decades later. In fact, Richard Cromwell III, previously the general manager and chief executive officer of SunLine, is now the C3VR coordinator.

"C3VR spent 20 years supporting the alternative fuel program at SunLine, and Lauren Skiver, the current general manager at SunLine, is taking it to the next level," Cromwell said.

"Our team gets excited about trying a new fuel or technology," Skiver said, explaining SunLine’s entrepreneurial spirit as something that sets the transit agency apart from others. "Part of our success stems from having different propulsion systems and vehicles from multiple original equipment manufacturers [OEMs] on the property. That’s a new approach for transit agencies, which typically have one OEM and one fuel type."

Aligning Fuels with Goals and Operations

"Our main business is transporting people across the valley. We don’t lose sight of that when we’re evaluating fuels," Edwards said. SunLine runs some dense city routes; however, the service area covers 1,100 square miles and includes nine member cities. "The current range capabilities for battery electric buses aren’t sufficient for the majority of our routes, and on-route demand charging infrastructure would be difficult and impractical to get in place," he said. As such, SunLine uses different fuels and chooses the appropriate fuel based on the duty cycle.

In addition to considering routes, SunLine evaluates technologies based on commercialization, cost, and fuel availability. "We’re not bent on one fuel over the other; our ultimate goal is near-zero or zero-emission technologies," Edwards said. "We look at hydrogen because it has zero emissions, as well as battery electric, and renewable natural gas paired with low-NOx [nitrogen oxide] engines. These technologies continue to drive advancement."

One way a fleet can take the necessary steps to meet emissions targets is to look at the end goal and work backwards to identify the right fuel or fuels. "The path to our goal is based on the commercialization of zero-emission technologies," Edwards said.

Additionally, gathering sufficient operations data is key to figuring out what fuel works for a fleet. Edwards recommends that a pilot project for a fuel or technology include around five to 10 buses to determine whether the technology really works in a fleet’s operations.

Assembling a Team and a Bus

"At every stage of fuel cell electric bus implementation, partners are essential," Skiver said. "We need someone to pay for it, build it, and run it, as well as the board to support it and eventually customers to ride in it. We approach the demonstration as a science project, prepared for failures, adjustments, and redevelopments."

With regulation guiding SunLine’s transition to zero-emission fuels, the company sought incentives to cover the price differential for new alternative fuel vehicles and infrastructure. "We raise our hands for many opportunities," Edwards said. SunLine received grants from the U.S. Department of Transportation’s Federal Transit Administration (FTA) and the U.S. Department of Energy (DOE) to demonstrate fuel cell electric buses and develop hydrogen infrastructure, as well as state grants from the California Air Resources Board and local funding from the South Coast Air Quality Management District.

Since the beginning, SunLine’s engineering, production, and operations teams have collaborated in an iterative process. "One of our biggest lessons learned was that we couldn’t go to an OEM and buy a zero-emission bus. That platform wasn’t available at the time," Edwards said. "We had to build a fuel cell electric bus that wasn’t in production, which meant we had to prove, refine, and determine the best way to commercialize, requiring support throughout from multiple teams within the organization."

In combination with funding and a well-rounded team, a risk-tolerant and supportive board was critical to the early success of the alternative fuel program and demonstrating fuel cell electric bus technology. "SunLine was successful in obtaining grants, and the board gave the team freedom to test technologies," Cromwell said.

"Another key factor to our success is the control of our own fuel supply and production," Skiver said. SunLine owns and operates one hydrogen and two CNG stations that supply fuel for its vehicles, as well as the public. SunLine also produces its own hydrogen onsite, using renewable sources of power, including solar and renewable natural gas feedstock. With energy management, SunLine’s operation is comparatively inexpensive and reliable, as it is not subject to fuel delivery costs or relegated to complications with delivery, and doesn’t have to contract out fuel production or infrastructure maintenance.

The hydrogen fueling infrastructure can produce enough hydrogen to operate five full-size transit buses. "Onsite fueling is cheaper and faster," Skiver said. "Having the fuel system on property is a particularly good alternative for transit agencies that may not have access to the required fueling infrastructure." To facilitate hydrogen fuel cell electric bus deployment, SunLine is working with partners to develop a hydrogen fueling starter kit that allows fleets to fuel five to 10 buses onsite.

Infrastructure remains an essential element to grow the hydrogen market. "If we had to fuel our entire fleet with hydrogen that would be a big unknown," Edwards said. "There remains lots of work to do on the infrastructure side, including determining how to scale up operations to fuel all buses overnight. As such, we continue to focus on energy management and scaling up fueling modules."

SunLine continues to evaluate fuel cell electric bus performance, working with FTA, DOE, the National Renewable Energy Laboratory, and other project partners to do so. Average data tracked from each evaluation period is available in the Alternative Fuels Data Center’s publications database and summarized at right.

In addition, SunLine is advancing infrastructure development through the SunLine West Coast Center of Excellence in Zero-Emission Technology (CoEZET), funded by FTA. SunLine leveraged its advanced technology bus and infrastructure testing to develop a center that serves as a warehouse for data and data collection and offers training for transit agencies and heavy-duty fleets. "We work together to determine how fleets can increase zero-emission technologies and share technology experiences," Edwards said. 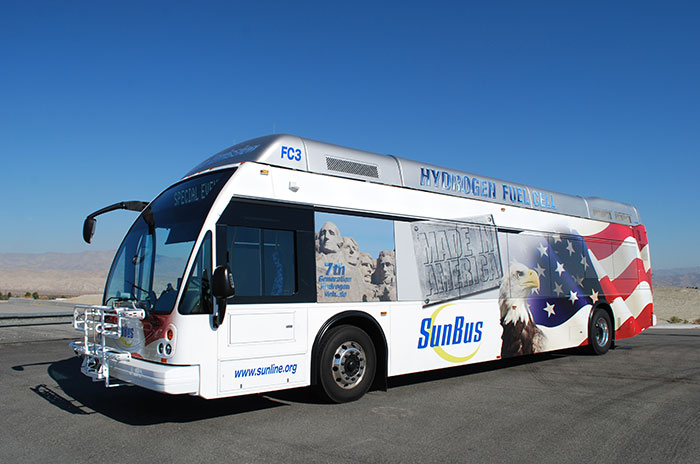