Hydrogen (H2) is an alternative fuel that can be produced from diverse domestic resources. Although the market for hydrogen as a transportation fuel is in its infancy, government and industry are working toward clean, economical, and safe hydrogen production and distribution for widespread use in fuel cell electric vehicles (FCEVs). Light-duty FCEVs are now available in limited quantities to the consumer market in localized regions domestically and around the world. The market is also developing for buses, material handling equipment (such as forklifts), ground support equipment, medium- and heavy-duty trucks, marine vessels, and stationary applications. For more information, see fuel properties and the Hydrogen Analysis Resource Center.

Hydrogen is abundant in our environment. It's stored in water (H2O), hydrocarbons (such as methane, CH4), and other organic matter. One challenge of using hydrogen as a fuel is efficiently extracting it from these compounds.

Currently, steam reforming—combining high-temperature steam with natural gas to extract hydrogen—accounts for the majority of the hydrogen produced in the United States. Hydrogen can also be produced from water through electrolysis. This is more energy intensive but can be done using renewable energy, such as wind or solar, and avoiding the harmful emissions associated with other kinds of energy production.

Almost all the hydrogen produced in the United States each year is used for refining petroleum, treating metals, producing fertilizer, and processing foods.

Although the production of hydrogen may generate emissions affecting air quality, depending on the source, an FCEV running on hydrogen emits only water vapor and warm air as exhaust and is considered a zero-emission vehicle. Major research and development efforts are aimed at making these vehicles and their infrastructure practical for widespread use. This has led to the rollout of light-duty production vehicles to retail consumers, as well as the initial implementation of medium- and heavy-duty buses and trucks in California and fleet availability in northeastern states.

Learn more about hydrogen and fuel cells from the Hydrogen and Fuel Cell Technologies Office.

Hydrogen as an Alternative Fuel

Hydrogen is considered an alternative fuel under the Energy Policy Act of 1992. The interest in hydrogen as an alternative transportation fuel stems from its ability to power fuel cells in zero-emission vehicles, its potential for domestic production, and the fuel cell's fast filling time and high efficiency. In fact, a fuel cell coupled with an electric motor is two to three times more efficient than an internal combustion engine running on gasoline. Hydrogen can also serve as fuel for internal combustion engines. However, unlike FCEVs, these produce tailpipe emissions and are less efficient. Learn more about fuel cells.

The energy in 2.2 pounds (1 kilogram) of hydrogen gas is about the same as the energy in 1 gallon (6.2 pounds, 2.8 kilograms) of gasoline. Because hydrogen has a low volumetric energy density, it is stored onboard a vehicle as a compressed gas to achieve the driving range of conventional vehicles. Most current applications use high-pressure tanks capable of storing hydrogen at either 5,000 or 10,000 pounds per square inch (psi). For example, the FCEVs in production by automotive manufacturers and available at dealerships have 10,000 psi tanks. Retail dispensers, which are mostly co-located at gasoline stations, can fill these tanks in about 5 minutes. Fuel cell electric buses currently use 5,000 psi tanks that take 10–15 minutes to fill. Other ways of storing hydrogen are under development, including bonding hydrogen chemically with a material such as metal hydride or low-temperature sorbent materials. Learn more about hydrogen storage. 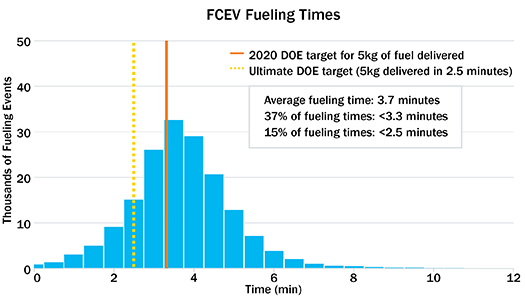 California is leading the nation in building hydrogen fueling stations for FCEVs. As of mid-2021, 47 retail hydrogen stations were open to the public in California, as well as one in Hawaii, and 55 more were in various stages of construction or planning in California. These stations are serving over 8,000 FCEVs. California continues to provide funding toward building hydrogen infrastructure through its Clean Transportation Program. The California Energy Commission is authorized to allocate up to $20 million per year through 2023 and is investing in an initial 100 public stations to support and encourage these zero-emission vehicles. In addition, 14 retail stations are planned for the northeastern states, with some of those already serving fleet customers.

Vehicle manufacturers are only offering FCEVs to consumers who live in regions where hydrogen stations exist. Non-retail stations in California and throughout the country also continue serving FCEV fleets, including buses. Multiple distribution centers are using hydrogen to fuel material-handling vehicles in their normal operations. In addition, several announcements have been made regarding the production of heavy-duty vehicles, such as line-haul trucks, that will require fueling stations with much higher capacities than existing light-duty stations. Find hydrogen fueling stations across the United States.