Propane is a by-product of natural gas processing and crude oil refining, with almost equal amounts of production derived from each of these sources. Most of the propane consumed in the United States is produced in North America. In addition to conventional propane, renewable propane—which is produced from renewable feedstocks—is also being explored.

Propane is produced from liquid components recovered during natural gas processing. These components include ethane, methane, propane, and butane, as well as heavier hydrocarbons. Propane and butane, along with other gases, are also produced during crude oil refining.

Propane is shipped from its point of production to bulk distribution terminals via pipeline, railroad, barge, truck, or tanker ship. Propane marketers fill trucks at the terminals and distribute propane to end users, including retail fuel sites. 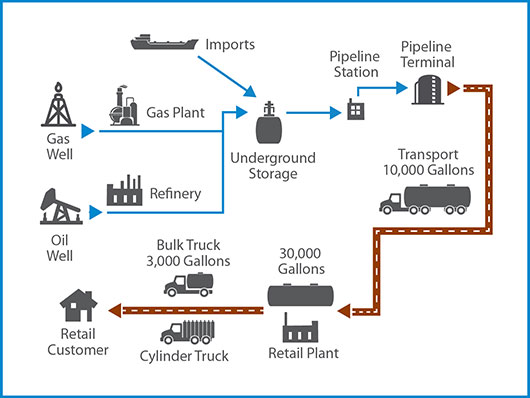 Propane Laws and Incentives by State