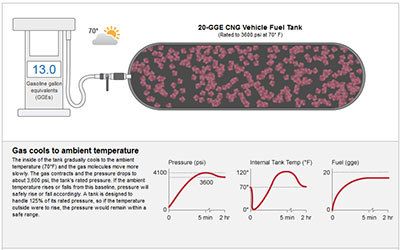 Use this interactive animation to learn how fill speed and temperature affect the final fill volume.

Unlike liquid fuel, which consistently maintains the same volume across a broad range of temperatures, compressed natural gas (CNG) will expand and contract significantly with a change in temperature. Heat causes CNG fuel molecules to expand, and cold causes the molecules to become denser. Therefore, under industry standard conditions (pressure and temperature), a CNG tank may typically contain 20 gasoline gallon equivalents. However, on a hot day the CNG molecules will expand, and the tank may only be able to accommodate up to 75% (or less) of its design potential under cooler temperature conditions.

Fueling equipment has been optimized with fast-fill dispensers that are equipped with a temperature compensation feature to help maintain temperatures to industry standard conditions and assist vehicles to achieve maximum fill of their fuel tanks.

The amount of CNG that can be stored in a vehicle's tank varies due to multiple factors: