In 2015, state legislators and governors enacted nearly two times more incentives, laws, and regulations related to alternative fuels, advanced vehicles, and other strategies than they did in 2014. Nonetheless, incentives, laws, and regulations related to plug-in electric vehicles (PEVs) and natural gas vehicles (NGVs), and the associated fueling infrastructure, remained the most common at the state level. Figure 1 includes a breakdown of the actions states and utilities took by fuel or technology type. 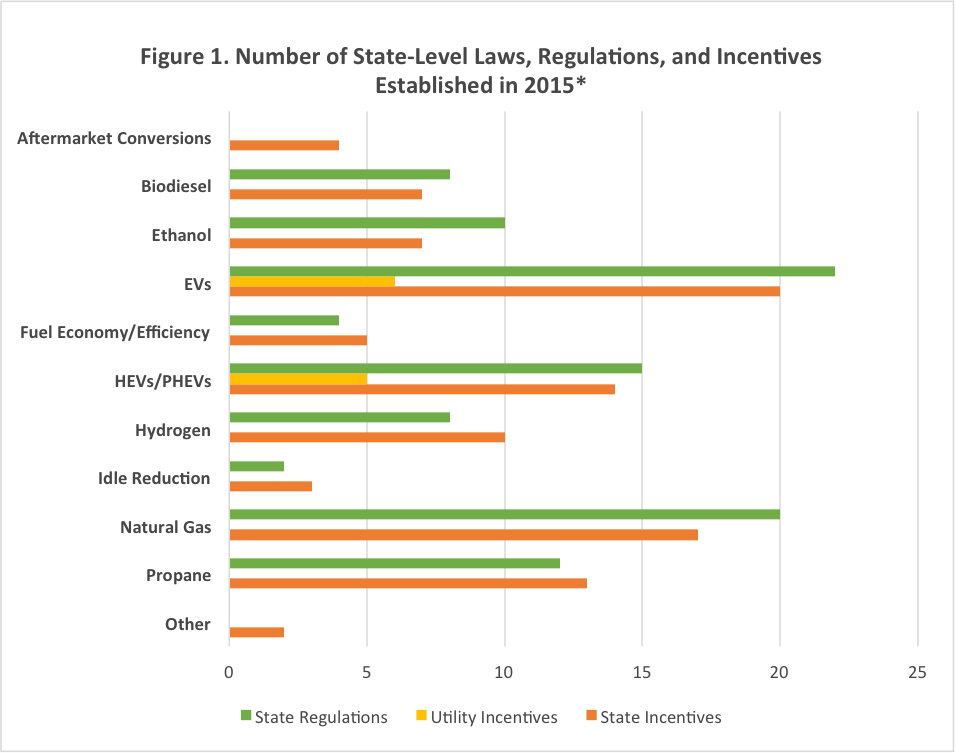 Figure 2 demonstrates year-to-year trends in state and utility incentives, as well as state laws and regulations. Except for a dip in 2014, which is possibly attributable to reduced state budgets and competing political priorities, the number of incentives for alternative fuels and advanced vehicles has increased steadily over the last four years. In contrast, the number of utility and private incentives during this time has decreased. An overall trend in laws and regulations are not as apparent, though year-to-year legislation in this area tends to follow market tendencies. For example, in recent years, the legislative focus has consistently been on NGVs and PEVs. 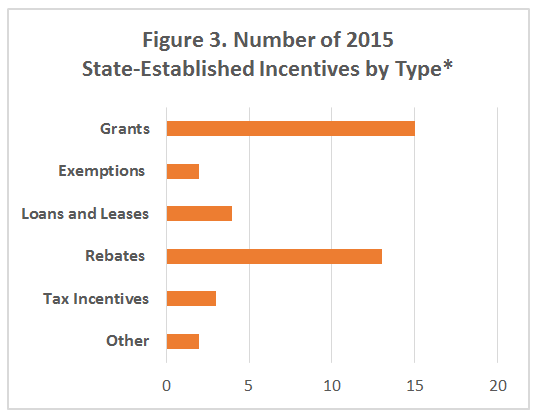 In 2015, state legislatures and agencies established 36 new incentives related to alternative fuels, advanced vehicles, and fuel-efficient transportation. This is a marked increase from the number of incentives established in 2014, and the highest number in the last four years.

The most common types of incentives established in 2015 were grants and rebates, as shown in Figure 3. States leading the way in these areas include Delaware, most notably for its Clean Transportation Program rebates for vehicles and infrastructure, as well as Colorado, Massachusetts, Maryland, Nebraska, and New Hampshire. While the number of incentives for most categories or types increased from 2014 to 2015, the number of tax incentives decreased. Significantly, Georgia repealed its successful tax incentive program. Aside from political and budgetary drivers, the decrease in new tax incentives may be the result of a call from industry to enact programs that will allow fleets and consumers to see their savings more immediately (e.g., rebates, vouchers), rather than waiting until tax season when the financial benefit may get lost in the other expenses and returns from the previous year.

Six new utility-based incentives were identified in 2015, the lowest number in the last four years. Note that there were no new private entity facility incentives and all new incentives were related to PEVs. Utilities continue to innovate and establish incentives that go beyond the typical rebate and electricity rate discount programs. For instance, Alabama Power offers an incentive to dealerships for each new PEV sale or lease within its service territory. Public Service Electric & Gas in New Jersey provides free electric vehicle supply equipment to qualified companies in its service territory for the purpose of workplace charging. 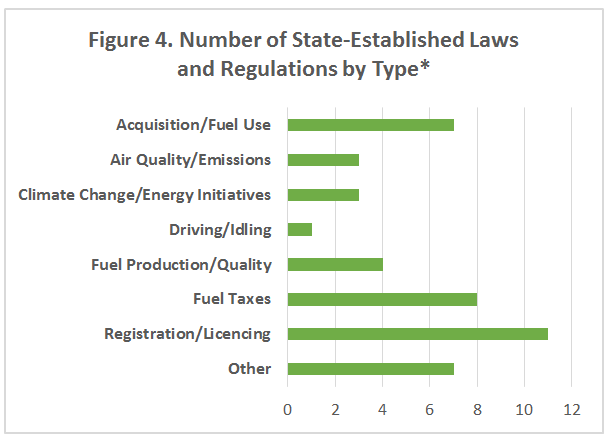 Several states also continued to build on a movement that began in 2014 and changes that took place at the federal level by enacting legislation to tax natural gas and other fuels on an energy (i.e., gasoline-gallon or diesel-gallon) equivalent basis. These states include Idaho, Michigan, Oklahoma, Tennessee, Utah, and Wyoming.

States also continued to set targets and requirements for their own fleets, many of which go above and beyond federal requirements for alternative fuel vehicle acquisition. For example, Colorado Executive Order 2015-013 established fleet purchase and pricing requirements that prioritize NGVs, annual fuel use reduction targets on a vehicle-specific basis, goals for inter-agency coordination on fuel-savings strategies, and commitments to workplace charging.