In 2016, the number of new state-level legislative, executive, private, and utility activities related to alternative fuels, advanced vehicles, and other strategies (54 total) was in line with activities in 2014 (50 total), but lower than 2015 (80 total).

The focus of state governments, utilities, and other entities on policies related to electricity as a transportation fuel remained consistent with previous years. Beginning in 2016, the Alternative Fuels Data Center (AFDC) began tracking incentives and laws related to hybrid electric vehicles (HEVs), all-electric vehicles (EVs), and plug-in hybrid electric vehicles (PHEVs), and the associated charging infrastructure separately, rather than grouping PHEVs and HEVs together. As demonstrated in Figure 1, most state actions related to electricity applied to both EVs and PHEVs. Perhaps most notably, new utility and private incentives focused almost entirely on electricity.

In previous years, natural gas was also a strong focus area for states. In 2016, however, the volume of new state incentives related to natural gas aligned with the other gaseous fuels (propane and hydrogen), as well as the biofuels (biodiesel and ethanol). State laws and regulations for natural gas surpassed any other alternative fuel type, as seen in Figure 1. 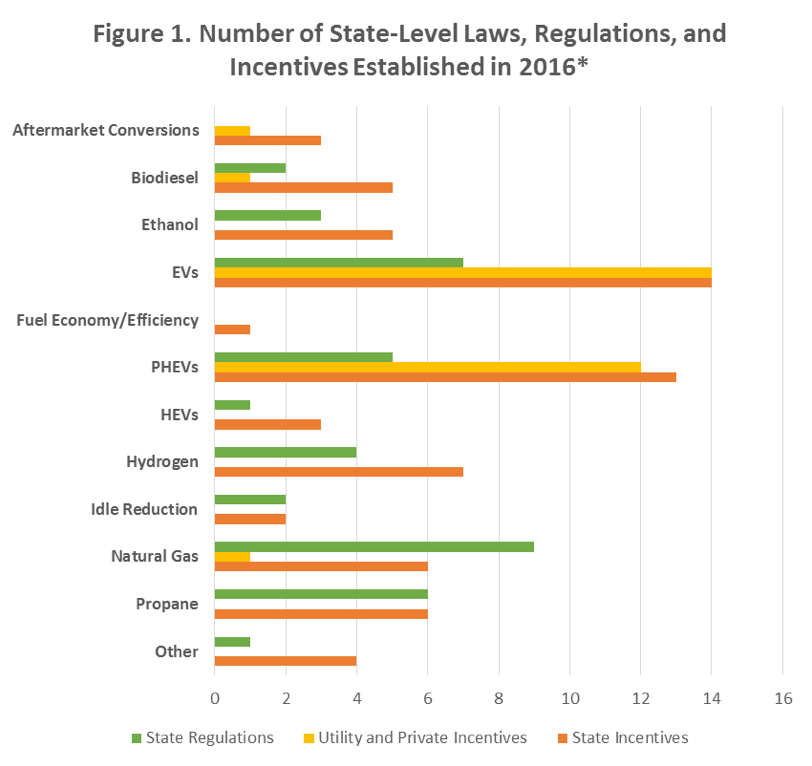 Figure 2 demonstrates annual trends in state, utility, and private incentives related to alternative fuels, as well as non-incentive state laws and regulations. The reduced activity in 2016, compared to 2015, may be attributed to competing political priorities during a presidential election year. The alternative fuel industry should, however, be encouraged by the relatively high number of new state incentives, compared to the previous presidential election year (2012), as well as the volume of new electric and gas utility incentives. 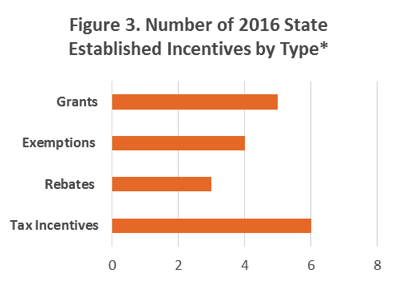 In 2016, state legislatures and agencies established 18 new incentives related to alternative fuels, advanced vehicles, and fuel-efficient transportation. This is exactly half as many such actions as in 2015, but still higher than 2014.

The number of new grant and rebate programs decreased by over 70% from 2015, though states (including zero emission vehicle memorandum of understanding states, New York and Rhode Island) continue to add rebate programs for plug-in electric vehicles (PEVs), a trend that became popular in 2015. 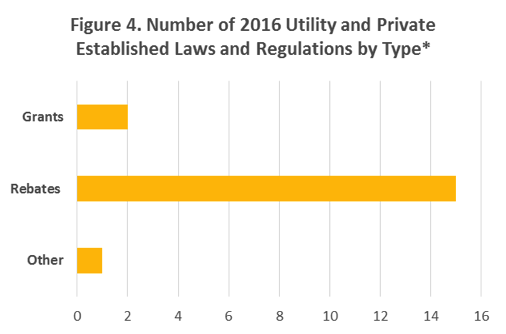 * Because an incentive may apply to more than one category or state, some items were counted multiple times.

Utilities and private organizations continued to focus on new PEV and EVSE incentives, rebates being the most popular (see Figure 4). Four such organizations implemented new EVSE rebates ranging from $500 to $5,000. This includes Yellowstone-Teton Clean Cities' rebate for public EVSE, as well as a pair of new rebate programs out of Alliant Energy for workplace, public, and residential EVSE.

Utilities also continued to be innovative in their new incentive offerings. For example, utilities and other organizations in California, Kansas, Massachusetts, and Rhode Island are working with local dealerships to offer PEV discounts for their customers and stakeholders. In addition, Sonoma Clean Power (SCP) offers customers free technology, which allows their EVSE to be connected to Wi-Fi and communicate with the SCP CleanCharge software. This software helps customers avoid using as much power when during peak electricity use periods. 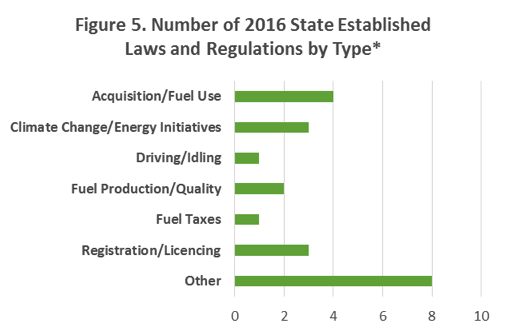 In 2016, states enacted 20 new laws and regulations related to alternative fuels and advanced vehicles, which, again, is about half as many as 2015. Figure 5 shows the most common topics for these laws and regulations. New requirements on state agencies (either related to their fleet or employee offerings) continued to be prominent, including requirements to offer PEV charging infrastructure for state employees (e.g., Vermont's Carbon Reduction Procurement Policies).

For the most up-to-date information on incentives, laws, and regulations in your state, see the AFDC searchable database. Also visit the AFDC Maps & Data page for related historical trends.