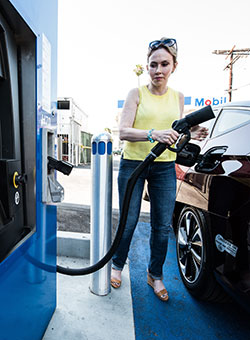 The increased number of retail hydrogen fueling locations in select markets is supporting the initial rollout of fuel cell electric vehicles (FCEVs). Manufacturers including Honda, Hyundai, and Toyota are currently offering production FCEVs for sale or lease to customers in markets where hydrogen fuel is available, primarily in California. With careful planning, the focus has been to add hydrogen fuel at existing gasoline stations covering regions in northern California near San Francisco and southern California near Los Angeles and San Diego, with additional connector and destination stations.

Mobile hydrogen fuelers, where liquefied or compressed hydrogen and dispensing equipment is stored onboard a trailer, are also being developed to support the expansion of hydrogen infrastructure. These efforts are giving early FCEV adopters confidence that they can drive normally and have access to hydrogen fuel wherever they go within these regions. Efforts are also underway to expand hydrogen fueling locations in Hawaii and across the East Coast, with other markets expected to develop as consumer demand increases. In mid-2020, there were about 43 retail stations available nationwide, mostly concentrated in California. In addition to the public, retail stations—which are available for all FCEVs, accept payment at the point of sale, and do not require special training to access—there are also private stations supporting fleets and some primarily used for demonstration and/or research. As the demand for FCEVs grows, the business case for building more stations with higher capacities improves and the volume in production of station components will bring station costs down.

The rollout of heavy-duty hydrogen trucks, such as line-haul trucks, will necessitate very large stations compared to light-duty needs. The increase in production and distribution of hydrogen for these stations could improve efficiency and utilization of expensive capital equipment leading to lower fuel costs per kilogram, benefiting both heavy- and light-duty customers.

Hydrogen infrastructure is also developing for buses, medium-duty fleets, and material handling equipment. Unlike the public consumer stations for FCEVs that need multiple locations to cover wherever the consumer may travel, private fleet fueling stations require fewer locations or even just a central location to meet a specific fleet's needs.