In 2017, the number of new state-level legislative, executive, private, and utility activities related to alternative fuels, advanced vehicles, and other petroleum reduction strategies (80 total) was much higher than 2016 (54 total), but in line with previous years. The analysis below provides detail on trends in new incentives, laws, and regulations added to the AFDC database in 2017.

The Alternative Fuels Data Center (AFDC) provides a searchable database of state and federal incentives, laws, and regulations related to alternative fuels and vehicles, vehicle efficiency, and other transportation-related topics.

State legislatures continued to focus on gaseous fuels. The number of hydrogen-related actions increased in 2017 by more than one-and-a-half times over 2016. Natural gas still remains a focus at the state level, particularly for incentives. State attention on biofuels (biodiesel and ethanol) has steadily decreased in recent years. 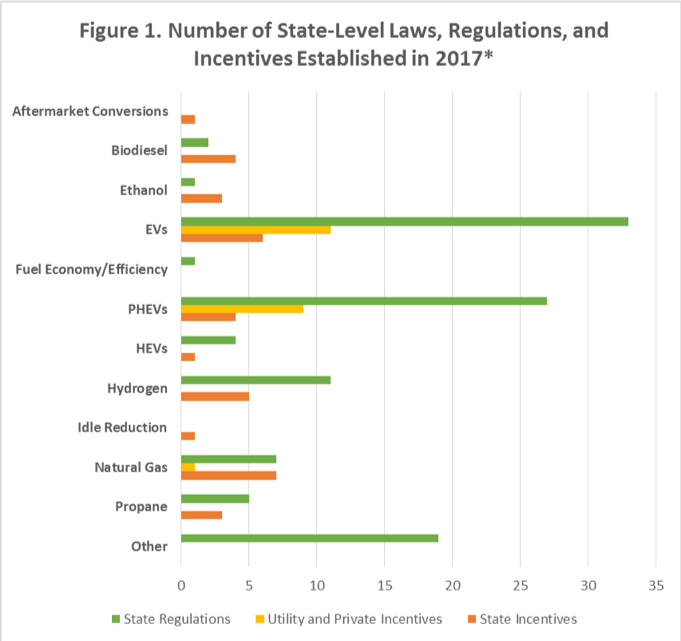 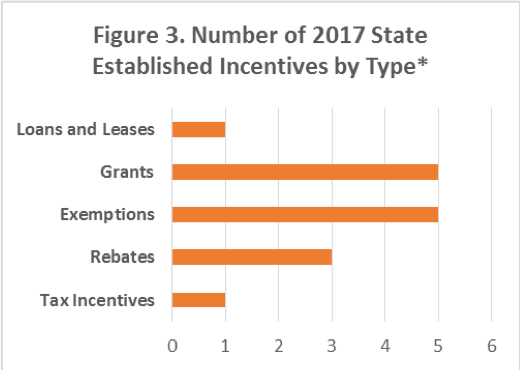 In 2017, the number of new incentives related to alternative fuels, advanced vehicles, and fuel-efficient transportation continued to decline. State legislatures and agencies established 13 new incentives in 2017, compared to 18 in 2016.

The most common new incentives established in 2017 were grants and exemptions, followed by rebates. In 2016, new tax incentives were more prevalent.

Missouri also enacted an exemption for operators of propane fueling stations equipped with a quick-connect nozzle. These individuals may sell propane without verifying that vehicles fueling at the station have a valid Missouri alternative fuel decal, as long as the appropriate motor fuel tax is collected at the time of fueling.

Texas joined the list of six states with a state-level PEV rebate program and will begin offering rebates in the spring of 2018. In New York, where there is an existing PEV rebate program for consumers, the New York State Department of Environmental Conservation's new Municipal Zero Emission Vehicle (ZEV) Rebate Program offers rebates to cities, towns, villages, counties, and New York City boroughs for the purchase or lease of eligible ZEVs and the installation of eligible ZEV fueling infrastructure.

Legislation in California introduced the Clean Cars 4 All Program for low-income residents to retire and replace high-emission motor vehicles. Eligible low-income applicants may receive compensation of no less than $2,500 toward a replacement vehicle or mobility option. The state will establish the program by January 1, 2019. California is one of the first states to structure incentive programs in a way that is more inclusive of low-income individuals. Oregon also authorized a program in 2017 that will allocate higher rebate amounts to low- and moderate-income drivers that live in areas that have elevated air pollution. 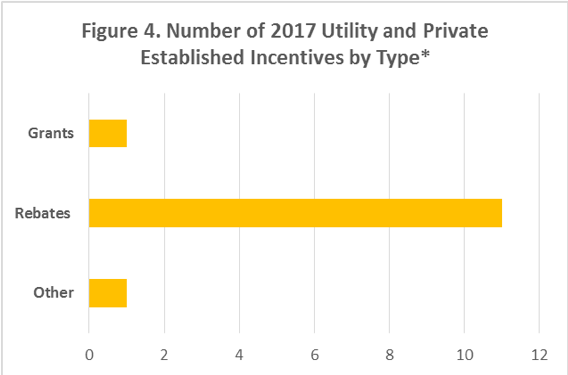 * Because an incentive may apply to more than one category or state, some items were counted multiple times.

Utilities (including private and municipal) and private organizations continued to introduce new PEV and EVSE incentives, with rebates being the most common (see Figure 4).

Several California utilities introduced vehicle and charging infrastructure rebates. In Vermont, Burlington Electric Department set up a $1,200 rebate on the purchase or lease of a new qualifying EV. Vehicles must have a manufacturer's suggested retail price (MSRP) of less than $50,000 and be registered in Burlington. Also in Vermont, Vermont Electric Co-op members receive a bill credit of up to $500 for the purchase of a new PEV. 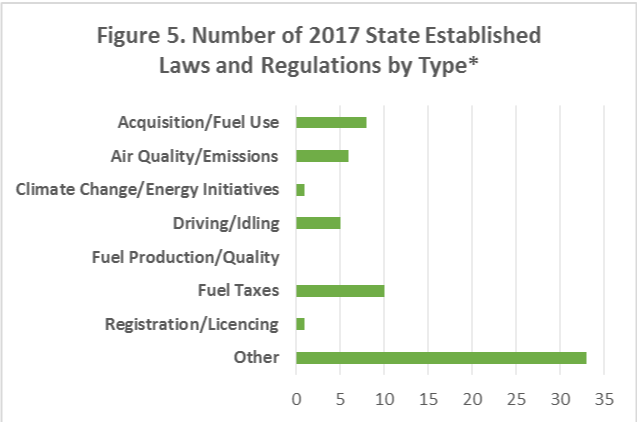 More than a third of the new laws and regulations fall into the "other" category, which includes 12 actions related to automated vehicles (e.g., Connecticut established an Autonomous Vehicle Task Force and Pilot Program). Three additions are related to the Volkswagen Clean Air Act settlement allocations (e.g., the Kentucky General Assembly must approve all fund allocations and the commonwealth will hold all funds in a trust and agency account). Also in this category, eight states-Arizona, Colorado, Idaho, Montana, New Mexico, Nevada, Utah, and Wyoming-signed the Regional Electric Vehicle West Memorandum of Understanding to create an EV corridor. Most of the remaining actions in the "other" category create requirements related to PEVs and the associated charging infrastructure. For example, in Massachusetts, public PEV chargers must have payment options that allow any user to operate the equipment.

Seven states (California, Oklahoma, Oregon, South Carolina, Tennessee, Wisconsin, and West Virginia) implemented registration fees ranging from $30 to $200 for certain AFVs. Approximately 20 states now have in place these fees, which are intended to offset decreased revenues from fuel taxes not garnered from fueling of these vehicles.

For the most up-to-date information on incentives, laws, and regulations in your state, see the AFDC searchable database. Also visit the AFDC Maps & Data page for related historical trends.