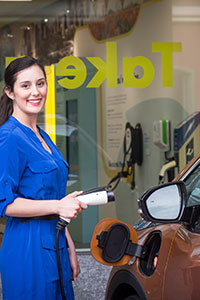 The United States became a net exporter of petroleum in 2020 with exports surpassing imports, although imports of 7.86 million barrels per day remained an important part of balancing supply and demand for domestic and international markets. Overall, the transportation sector accounts for approximately 30% of total U.S. energy needs and 70% of U.S. petroleum consumption. Using more energy efficient vehicles like hybrid and electric vehicles supports the U.S. economy and helps diversify the U.S. transportation fleet. The multiple fuel sources used to generate electricity results in a more secure energy source for the electrified portion of the transportation sector. All of this adds to our nation’s energy security.

Although energy costs for electric vehicles are generally lower than for similar conventional vehicles, purchase prices can be significantly higher. Prices are likely to equalize with conventional vehicles, as production volumes increase and battery technologies continue to mature. Also, initial costs can be offset by fuel cost savings, a federal tax credit, and state and utility incentives. The federal Qualified Plug-In Electric-Drive Motor Vehicle Tax Credit is available for EV purchases from manufacturers that have not yet met certain thresholds of vehicle sales. It provides a tax credit of $2,500 to $7,500 for new purchases, with the amount determined by the size of the vehicle and capacity of its battery. Some states and electric utilities also offer incentives, many of which can be found in the Laws and Incentives database. For more detailed information on available incentives, connect with your local Clean Cities coalition.

Use the Vehicle Cost Calculator to compare lifetime ownership costs of individual models of electric vehicles and conventional vehicles.

Electric vehicles can reduce fuel costs dramatically because of the high efficiency of electric-drive components. Because all-electric vehicles and PHEVs rely in whole or part on electric power, their fuel economy is measured differently than that of conventional vehicles. Miles per gallon of gasoline equivalent (MPGe) and kilowatt-hours (kWh) per 100 miles are common metrics. Depending on how they are driven, today's light-duty all-electric vehicles (or PHEVs in electric mode) can exceed 130 MPGe and can drive 100 miles consuming only 25–40 kWh.

All-electric vehicles and PHEVs have the benefit of flexible charging because the electric grid is near most locations where people park. To safely deliver energy from the electric grid to a vehicle’s battery, a charging station, sometimes referred to as electric vehicle supply equipment (EVSE), is needed. Drivers can charge overnight at a residence, as well as at multi-family housing, the workplace, or a public charging station when available. PHEVs have added flexibility because they can also refuel with gasoline or diesel (or possibly other fuels in the future) when necessary.

The advanced batteries in electric vehicles are designed for extended life but will wear out eventually. Several manufacturers of electric vehicles are offering 8-year/100,000-mile battery warranties. Predictive modeling by the National Renewable Energy Laboratory indicates that today’s batteries may last 12 to 15 years in moderate climates (8 to 12 years in extreme climates).

Check with your dealer for model-specific information about battery life and warranties. Although manufacturers have not published pricing for replacement batteries, some are offering extended warranty programs with monthly fees. If the batteries need to be replaced outside the warranty, it may be a significant expense. Battery prices are expected to decline as battery technologies improve and production volumes increase.

Share of All U.S. Vehicle Trips by Length (miles)